The presence of the dead, the behavior of the living, and an influence on the future – the many generations of the Vietnamese family.

Ancestor worship was introduced into Vietnam by the Chinese during their long occupation of the country that began 200 years before the birth of Christ. Since then, it has been fully absorbed into the Vietnamese consciousness and, with Confucianism, underpins the country’s religion and social fabric.

Ancestor worship is not only the adhesive that binds the Vietnamese together, but also one of the most difficult concepts for people from Anglo-Saxon or European origins to understand. It has been said that the Vietnamese believe in the dead while the Occidentals believe only in death.

How do Vietnamese people worship their ancestors?

The practice of ancestor worship is relatively straightforward. Nearly every house, office, and business in Vietnam has a small altar which is used to commune with ancestors. Incense sticks are burned frequently. Offerings are made – fruit, sweets, and gifts. The latter items are paper replicas of dollar notes (‘ghost money’), motorbikes, cars, houses and so on. After worship, the paper gifts are burnt so that the spirits of the gifts can ascend to heaven for the ancestors to use.

In the past, the income from a plot of land was used to maintain the altar and arrange the rituals, but this tradition has now faded away. However, the custom that the eldest son will arrange the ceremonial and inherit the family house upon the death of his parents is still generally observed.

Another traditional element is the placing of wooden tablets on the altar for each of the ancestors over recent generations. This is less rigorously observed today, and tablets are often replaced by photographs. Some pagodas house commemorative tablets for ancestors on behalf of regular worshipers. 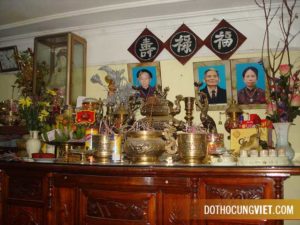 When do Vietnamese people worship their ancestors?

Worshiping takes place regularly on particular days, such as festivals, new and full moon days, the death day of the ancestor, and so on. On important occasions, such as moving house, starting a new business or the birth of a child, and whenever a member of the family needs guidance or a favour, the ancestors are consulted.

A proliferation of small fires of burning paper in the streets of towns and cities means that it is a festival or moon day. One paper fire is likely to be an event affecting a single family.

Why do Vietnamese people worship their ancestors?

For the Vietnamese, ancestor worship is not related to ghosts, spiritualism or even the supernatural in the Western sense. It is not even a ‘belief’ in the sense that it is open to question by the ‘believers’. The Vietnamese accept as a fact that their ancestors continue to live in another realm and that it is the duty of the living to meet their needs. In return, the ancestors give advice and bring good fortune.

Devotees of Buddhism believe in previous existences, and seek to correct previous bad deeds to reach enlightenment. Ancestor worship is fundamentally different. For the Vietnamese, death, and the ritual and practice of ancestor worship, constitutes the transfer of power from the tangible life to the intangible. Existence is a continuum stretching through birth, a life spent in tangible form on Earth, followed by death and a spirit existence in another realm for a further two or three generations.

Who are the heroic ancestors

By virtue of their worthy deeds, heroic ancestors, such as Tran Hung Dao and the Trung sisters, continue to exist and be worshipped in temples for many generations beyond the two or three of ordinary folk. Their rectitude is a model to guide the behavior of the living.

What about ‘bad’ ancestors?

All ancestors are worthy of respect and reverence, regardless of their behavior as living beings. However, the misdeeds of a wicked family ancestor will be visited upon his or her children and grandchildren in the form of bad luck. This is a powerful influence upon the behavior of the living, influencing them to behave well and do good deeds in the present, thereby endowing their living and unborn children with good luck in the future. 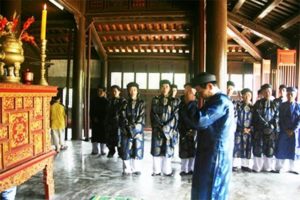 How does ancestor worship affect daily life in Vietnam?

The effect of ancestor worship upon Vietnamese society is profound. There are three main concepts:

Taken together, these convictions extend the concept of the family far beyond the sense in which the term is used in the West. A Vietnamese person is never ‘alone’ – his or her ‘family’ is always present.

What is the future of ancestor worship in Vietnam?

Whether ancestor worship will continue to be strong as the influence of scientific rationalism and social change accelerates, is an open question. In the past, the majority of individual family members lived within close geographical proximity. The turmoil in the years before and after the defeat of the US forces led to an exodus of hundreds of thousands of Vietnamese people.

More recently, economic migration and travel to far countries to study or work have created a growing Diaspora. Only time will determine whether the strength of the beliefs that have sustained the Vietnamese family unit over many centuries and created a unique national community will withstand the pressures of globalisation and expanding modern technology.

A Vietnamese teacher who is passionate about her language and culture